Here’s a transcript of the video, in case you prefer to read…

We often hear the story that Lindy Hop died after World War II and that there was a revival in the early 80s when dancers from Sweden, the UK and the US found videos of the old timers and sought them out. But is that what really happened?

It is true that roles for black dancers in films and broadway were few and far between after the second world war, and the press no longer took interest in Harlem other than to depict it as a ““no go” menacing area. But there were still people in Harlem and in small communities keeping the social dance tradition alive.

Beyond that I want to look at the people who not only wanted to keep the dance alive but to share their talent with the world, Mama Lou Parks, Norma Miller, Al Minns and Leon James.

Mama Lu started as a hat-check girl at the Savoy. But under the tutelage of dancers like George Sullivan, Delma “Big Nick” Nickerson and Lee Moates, Mama Lu became a significant dancer in her own right.

After the Savoy Ballroom closed in 1943,  Charles Buchanan, the Manager of the Savoy, urged Mama Lou and her fellow dancers to take on the responsibility of staging the Harvest Moon Ball  Lindy Hop preliminaries, at the new Savoy Manor in the Bronx. Mama Lu rose to the occasion and was integral for keeping the tradition of the Harvest Moon Ball going for years to come.

Side note, the Harvest Moon Ball was an annual dance competition in Madison Square Gardens in New York City, at the height of the swing era, on a scale that we can hardly even imagine today. It  started on July 7th 1935 hosted by the New York Daily News. It was an open competition for amateur ballroom dancers 18 or over. Thousands upon thousands of spectators came to watch dancers compete in all kinds of styles.

For more details about the history of the Harvest Moon Ball and how its creation relates to the 1935 Harlem riots, I cannot recommend Bobby White’s blog post enough. Link below.

By 1961 she had established a professional dance company – mostly composed of those who had won the Harvest Moon Ball –  and this dance company went by a variety of names, The Lou Parks Dancers, The Parkettes; Mama Lu Parks and her Jazz Dancers – as well as many others. The company continued touring for 29 years until her passing in 1990, from my research this is possibly the longest jazz dance company in history.

The Parkettes weren’t just limited to touring the US, they toured around the world! Performing in Sweden in 1963 with the “King Coleman Show”, in Mexico in 1968 at a cultural festival before the ‘68 Olympics

The Parkettes attracted the attention of the British TV Company who produced “The Southbank Show” a UK television show on ITV. In 1981 they paid for one of Mama Lu’s events to be re-staged at Small’s Paradise Club on 7th Avenue in Harlem. So not only were they travelling all over the world, they had significant international media attention. Inspiring modern dancers like Ryan Francois and performing at the Count Basie Centennial 2004.

But, what about Ms Norma Miller?

In 1952 Norma Miller started a new chapter in her life, forming The Norma Miller Dancers in New York, which included Frankie Manning’s son Chazz Young as well as her long-time partner Billy Ricker. Every time her group had a new act they would debut it at the Apollo Theatre.

The Norma Miller dancers toured the US and then Australia, upon their return in 1954, her group joined The Count Basie Show and continued touring throughout the US.

By 1956, the Norma Miller Dancers performed in Murray Weinger (pronounced whiner) and Benny Davis’ Cotton Club Show. This show also starred Cab Calloway, Sallie Blair, Lonnie Satin, and George Kirby and was produced by Mervyn Nelson. This was the first all Black show to play the BeachComber in Miami Beach, Florida.

To put this into context, the case of Brown v. Board of Education, had just been finalised in 1954. This landmark case fought to desegregate the school system, as white school facilities were far superior to black schools and therefore did not fit the “equal but separate” equality clause which had been established in 1896. The civil rights movement was still fighting for equal access to schools and there were many facilities, like hotels or restaurants which were still segregated 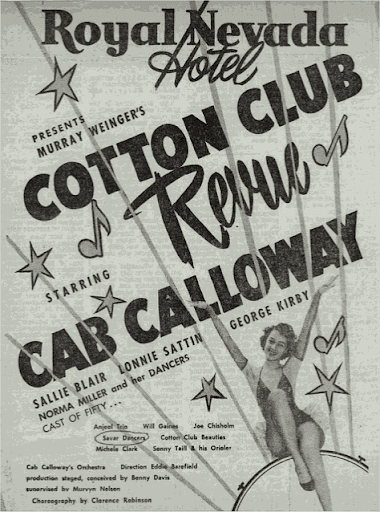 “In the pervasive racial segregation of the day, Ms. Miller and her group faced daily reminders of their secondary status in renting rooms, riding in the back of buses, dining in black eateries and sometimes confronting white protests.”

While working in Miami Beach, Miller took her first stab at comedy. She and Cab Calloway acted out a Romeo and Juliet comedy skit. They stayed in Miami Beach until 1959. For those of you who didn’t know Miller had a stand up comedy career after her life as a dancer, even visiting Vietnam from 1972 until 1974 touring her comedy for American troops.

Al and Leon meanwhile were working the media. Appearing on a variety of television shows and magazines highlighting the Jazz dances they loved so much.

Al and Leon appeared on the show “Playboy’s Penthouse” alongside Marshal Stearns. which incidentally is my favourite vintage clip of all time. This was filmed in either 1959 or 1960 and features Hugh Hefner interviewing Marshall Stearns about Jazz dances with Al and Leon demonstrating.

They were also featured on The DuPont Show of the Week in November 1961. That month The DuPont show had 2 episodes dedicated to American music, specifically the music of the thirties and Chicago Jazz, featuring Count Basie and John Bubbles, then Bud Freeman, Gene Krupa, Jack Teagarden and a tribute to Louis Armstrong respectively.

They also were heavily featured in The Spirt Moves a documentary by Mura Dehn who was intent on documenting the dances of the swing era both in the studio and at the Savoy. It’s thanks to her that we have footage of The Tranky Doo, Stops and other dances. She was a great ally to those who were still dancing in the 50s and 60s helping book gigs and providing support where possible.

Judy Prichett: “That was 1985-86 on 125th St. near 5th Ave. The band is the Al Cobbs C&J Big Band which played Monday nights at Small’s until it closed down and then moved into this space in an office building. Most of the people who came to Northern Lights had danced at the Savoy. For me it was magical. It was where I learned to danced and where I connected to Frankie.”

To say Lindy hop died after world war 2, is too simplistic. Our world is far more nuanced and interesting than that. The massive social dances and the media/Hollywood’s interest in jazz dances might have diminished, but the dance itself was kept alive by the hard work of so many people. The dance had to change and adapt to the modern world but people kept dancing and kept the traditions alive. The dance evolved into other styles like Hand dancing, also known as “D.C. hand dancing” or “D.C. swing”. This dance evolved as rhythm and blues music was becoming the craze in the Washington, D.C., Metropolitan Area in the 1950s. It’s known for its smooth style and gliding footwork.

We can honour and celebrate those who made sure that jazz dance traditions would be around for us to enjoy. Mama Lu Parks, Norma Miller, Al Minns and Leon James, Marshall Stearns, Mura Dern, Chaz Young, the list goes on and on. By saying lindy hop died erases the work they did and fails to acknowledge them.

So here’s to all of those who kept the party going so we could keep dancing today.